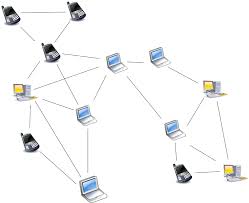 The most common computer network used to interconnectphysically distributed computers is Local Area Network which has three main topologies:Star Topolog Bus Topology, andRing Topology Others are: Mesh Topology, andHybrid Topology Please note, the data in the network layer is in the form IP packets. IP packets are packed into frames in the datalink layer. Physical layer then transmits the frames intothe transmission media. For example, networking cables.

So in a computer network, the data moves fromone computer to another in the form of frames. The same term will be used in further discussion. Starting with Bus topologyIn a bus topology, computers connect to a shared central cable, called a bus, with tapsand drop lines. Shared means that all connected computersuse the same cable for data frame transmission. Taps are the connectors, and drop lines arethe cables running in between the computers and the bus. In this topology, if a computer sends dataframes to a second computer, all other computers connected to the same central cable also receivethe frame, i.e. other computers can hear what the first computer is saying.

However, only the target computer acceptsit; others reject the frame by checking the destination MAC address in the received frame. Suppose you are distributing prizes as perthe results of a competition. You asked Ram to come on the stage for hisreward. So, only Ram will go and collect the prize. Same is in the case of bus topology.

Only that computer accepts data frame to whomit is addressed to. Since bus topology requires less cabling,so it is easy to install and less expensive to implement as compared to other topologies. However, with the increase in the length ofthe central cable and increase in the count of taps, the strength of the signal decreases,so only a limited number of computers can be connected in bus topology. In this topology, all computers depend onthe central cable for data transmission.

So, if the central cable fails, it paralyzesthe whole network, i.e. bus topology has very little fault tolerance. Here, a security risk also exists becauseall computers can hear what other computers are saying on the shared media. In a bus topology, only one computer can transmitdata at a time. So while one computer is sending a file toa printer, other computers have to wait. If other computers too start sending dataat the same time, it will collide and corrupt the whole data. In such a case, data should be re-transmitted.

Therefore, if more computers connect to thesame central cable, the network will become slower and also increase the chances of datacollisions. It is one of the reasons why bus topologyis rarely used in modern computer networks. The collisions can be avoided by using anaccess control protocol. For eg. Carrier Sense Multiple Access with CollisionDetection (CSMA/CD). Example of bus topology isEthernet LANs Next isStar topology In Star topology, the computers connect toa central device, a switch or a hub, with point-to-point communication links. Point-to-Point connection means that thereis a dedicated link/cable between the two devices.

Other devices can not use it. In this topology, if one computer wants tosend some data frame to another computer, it is first routed to the central device. The central device, then, either broadcastor unicast the received data frame towards the destination computer based on the typeof central device used. Broadcast means the transmission of data toall connected devices while unicast means transmission of data to the target deviceonly. If the central device is a hub, it broadcaststhe received frame to all of the connected computers, i.e. a hub is a multiport repeater. The frame has a destination MAC address whichis unique to every computer present in a network, so only the target computer accepts the frame,others reject it.

Since a hub broadcasts the received data,so it increases unnecessary data traffic in the network. To overcome this limitation, a switch is usedas a central device. Every computer has a unique MAC address. A switch stores the MAC address of the devicesconnected to its ports. It is called a switch table. Since the data frame it receives has a destination MAC address, and the switch knows that the device with MAC address MAC 2 is connectedto port P2, so the switch forwards the received data frame to port P2 only.

Moreover, when the computer is busy in sendinga file to the printer, computers A and B can also communicate with each other without affectingthe computer – printer link, i.e. switched connection allows simultaneous communication. On the other hand, a hub allows only one deviceto communicate at a time. Please note if the destination MAC addressin the frame is Ethernet broadcast address, then the switch also broadcast the receivedframe. In star topology,Only one input/output port and one cable is needed for each device to connect to severaldevices.

It makes it less expensive than the mesh topology. It is also easy to reconfigure because wecan add or remove devices simply by connecting or disconnecting one cable. If one cable connecting to the central devicefails, only one communication link goes down and not the entire network. So star topology has good fault tolerance. Fault detection is also easy because we onlyneed to locate a computer which is not receiving data. However,If the central device goes down, the whole network is paralyzed. One more limitation in star topology is Thenumber of computers in the network is limited by the number of input/output ports in thecentral device.` Example of star topologyHigh-speed LANs.

Now Ring topologyIn a ring topology, each computer connects to two adjacent computers to form a ring. Data transmitted by one computer moves fromone computer to another in a circular fashion to reach its final destination. the advantages of ring topology areEasy installation and less cabling, compared to mesh topology. In this topology, data moves in one direction,it reduces the chances of data packet collisions. The ring topology is relatively easy to troubleshootbecause we only need to locate a computer which stops receiving data from its upstreamneighbour.

Token ring uses a token-passing protocol,where a frame, called token, keeps on circulating on the ring. If one computer has data frames to transmit,it holds the token and transmits the frame. Once the transmission is done, the token isreleased into the network. A token ring network is deterministic, meaningeach connected computer is given access for transmission at fixed time intervals. Therefore, a network can have one physicaltopology and an entirely different logical topology at the same time. Mesh topologyIn a fully connected mesh topology, each device has a point-to-point link to every devicein the network.

Therefore,· If the number of devices in a network is 4· Then the number of links/cables each device have is 4-1, i.e. 3Now, we have 4 devices, · Therefore, total number of links/cables4 devices have is 4 (4-1), i.e, = 12 Note that these are simplex links. In simplex links, data can move in one directiononly. So, one link is used for sending data, andthe other is used to receive data from the adjacent computer. Duplex links are the ones where data can movein both directions. Therefore, we can replace two simplex linkswith one duplex link.

The dedicated point-to-point link maintainsprivacy and security of the messages shared between two devices because other computerscannot hear what the computer A is saying to computer B. · If one link fails, it does not affect thewhole network, i.e. good fault tolerance, · Since each device is connected to everydevice, so installation is difficult. · Multiple input/output ports and a largenumber of cables increase the cost and make it expensive. · More cables in mesh topology consume largespace too. Example of mesh topology isThe connection between regional telephone offices. All topologies are interconnected to forma hybrid topology. Every topology has it’s merits and demerits,so while choosing a physical topology for a network, we should always consider:  It’s Cost Ease of installation  Ease of maintenance, and Cable fault tolerance.