What is a firewall? A firewall is a system that is designed toprevent unauthorized access from entering a private network byfiltering the information that comes in from the internet. A firewall blocksunwanted traffic and permits wanted traffic. 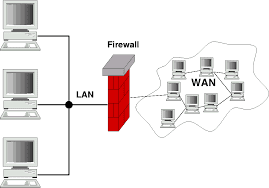 So a firewall’s purpose is to create a safetybarrier between a private network and the public internet. Because out on the internet, there’s alwaysgoing to be hackers and malicious traffic that may try to penetrate into a private networkto cause harm. And a firewall is the main component on anetwork to prevent this.

and a firewall is especially important to a largeorganization that has a lot of computers and servers in them. Because you don’t want all those devicesaccessible to everyone on the internet where a hacker can come in and totally disrupt thatorganization. That’s why you need a firewall to protectthem.

But if the firewall wasn’t here, the firewould spread to the other side and the whole building would be destroyed. And a network firewall works in a similarway as a structure firewall. It stops harmful activity before it can spread into the other sideof the firewall and cause harm to a private network. In today’s high-tech world, a firewall isessential to every home and especially a business or an organizaton to keeptheir network safe. A firewall works by filtering the incomingnetwork data and determines by its rules if it isallowed to enter a network, these rules are also known as an access control list.

These rules are customizable and are determinedby the network administrator. The administrator decides not only what canenter a network but also what can leave a network. These rules either allows or denies permission. So as an example, here we have some rules in a firewall’s access control list. It shows a list of IP addresses thathave been allowed or denied by this firewall. And as you can see, traffic from some IPaddresses are allowed to enter this network..but traffic from one IP address has been denied. So, if traffic from this IP address tried toget into this network, the firewall will deny it becauseof the rules that are set in the firewall..

But the other IPaddresses are granted access because the rules Allow them. Firewalls don’t just make rules based inIP addresses, but they can also make rules based on domain names, protocols, programs, ports, and keywords. Let’s say in this example, the firewallrules are controlling access by port numbers. and let’s say that the rules have allowedincoming data that’s using port number 80, 25, and 110, and the data usingthose ports have been given access to this network.

They will use a network-based firewall toprotect the entire network as a whole…and they will also use host-based firewalls fortheir individual protection for their computers and servers. And by doing this, it’ll ensure maximum protection . Because if harmful data just so happens toget passed the network firewall…the host based firewalls on each computer will be thereto stop it.