It’s like texting but, like,you make things do stuff. Programs on a computer, like. Like computer programmingand stuff like that – Spheros. So, when I think about coding,I just think of the problems that it causesbut in having to overcome them. 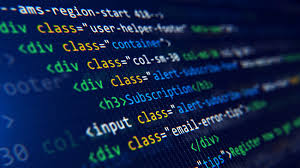 Um, basically, I think of just,you know, a list of steps and instructions that you have to followin order to complete a task. Coding has really changed,in my opinion, from being kind of line by line, looking at all the squigglesand slashes, to now interacting with robots,block-based coding and then hopefullyinto app development. Coding is simplyusing a language. Just like with any language,there are rules that we follow so that it can make sense.

If I write words downon a piece of paper, someone else can take that paperand read them. It might be a recipe that someone else can followto make my favourite meal. When I write itin a programming language, I’m writing somethingthat a computer can understand. Instead of a recipe, it’s morelike a set of instructions that a computer can readand then execute. So I found it to bea real struggle to kind of capture themand their interest in coding, just learning the purelanguages, line by line, uh, the syntax, whereas now, since 2015, we were also introducedto the Spheros which the studentsare using today.

And now I think that’s the hook. They like to program the bots. They like to see what they’redoing with the code is actually having and movinga physical object versus just staring ata computer screen, right? It’s really changed in 20 years.

Yeah, I definitely thinkit’s important to teach everyone coding because it’s something that’sgoing to be seen more and more as we move forward. Uh, it’s 21st century learning so, really, it’s everywhere. It’s in our computers and everything that usescomputers uses coding, so from banking, agriculture,it’s there. So, for students,I think it’s important to learn just because it introduces themto the idea. Whether they’re working incoding or not in their careers, I think it’s important that theyget that introduction to it so that they’re awareof what it is and can relate to it.

And it also just teachesa lot of skills that are essential everywhere, from problem solvingto logic skills, they’re valuable skills. Whether they’re applied tocoding or not, there’s a lot of soft skillsthat are gained from it as well. We’re surrounded by technology and all these technologiesuses language to be able to completethese tasks, so knowing how to codewill allow us to communicate with these computers. Computers are everywhereand a big part of our lives.

And coding lets uswork with computers so that we can solve problemsand create new things. Coding has a place in prettymuch every domain of our lives, from art to design, to math, to science,to engineering. Learning how to codecan help students in the areas that are notrelated to the STEM field. Students who code understandthe value of being concise and the need to plan. This can result inbetter writing skills. Coding helps withthe processing skills that would enable themto decode text more easily.

Coding teacheslogical communication, strengthens both verbal andwritten communication skills. Think about it. Learning to code is likelearning a new language. Coding is importantin many aspects of our lives from finance and healthcare to manufacturingand entertainment. We don’t know what jobswill exist in the future but coding is a trendthat is not going away. Having this skill will open uphuge possibilities.