Have you heard of IEEE 802.3? It has a long history and has todo with our topic today, Ethernet. Ethernet is acommunication standard that was developed in the early ’80sto network computers and other devices in a local environment suchas a home or a building. This local environment is definedas a LAN (Local Area Network) and it connects multiple devicesso that they can create, store and share informationwith others in the location. 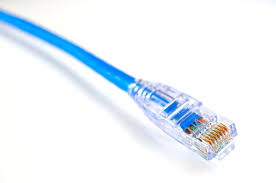 This standard defined the physical layer and the MAC (media access control) portionof the data link layer of wired Ethernet. These two layers are definedas the first two layers in the OSI (Open SystemsInterconnection) model The “physical” layer consistsof the following components: Cabling and Devices. First, let’s take a lookat Ethernet Cabling; As stated previously, Ethernetcables come as coaxial cable, which is not very commonexcept in older installations, twisted pair, and fiber optic.

The most common cableis twisted pair cables, with the latest being Category6 with speeds up to 1 Gbps and Cat6a and Cat 7 withspeeds up to 10 Gbps. Category 5 and 5e cables are both stillused in many existing applications but handle the lowerspeeds between 10 Mbps to 100 Mbps but are moresusceptible to noise. The Ethernet twisted pair utilizesRJ-45 eight-pin connectors at either end of the cable thatis pinned for transmitting and receiving data in eitherhalf or full-duplex mode. Half-duplex transmits datain one direction at a time while “full-duplex” allowsdata to be transmitted in both directionsat the same time.

Full-duplex in Ethernet can beachieved by using two pairs of wires to allow data to travel bothdirections simultaneously. Fiber optic cable uses glassor plastic optical fiber as a conduit for lightpulses to transmit data. It has allowed Ethernet to travelfarther distances at higher speeds. Fiber optic cables use severaldifferent types of connectors that vary depending onyour application needs.

Some of the different types are SFP (Small Form Pluggable orSmall Factor Pluggable) and SC (Subscriber Connector, also known asSquare Connector or Standard Connector). In order to use fiber opticin an Ethernet network that utilizes twistedpair Ethernet cabling, you need to use an Ethernetto fiber converter that will allow your network to take advantageof the higher speeds of fiber optic and lengthen the distance thatthe Ethernet network can reach. How about the Ethernet devices? Ethernet devices areconsist of computers, printers or any device whicheither have an internal NIC (Network Interface Card) or an external one thatis USB or PCI based.

“Switches” and “Routers” that actas the director of the network and connect multiple computers or even networks togetherto enable communication between all the different devices. “Gateways” or “Bridges” are used to connectmultiple Ethernet networks together and allow communicationacross them.

Gateways connect twodissimilar networks together while a bridge connects twosimilar networks together so that you only see one network. Now that we have discussed the basicphysical components of Ethernet, let’s move into the second layer ofthe OSI model, the “data link” layer. The data link layer can besplit into two sections; the Logical Link Control (LLC) and the Media Access Control (MAC). The Logical Link Controlestablishes paths for data on the Ethernet totransmit between devices.

CSMA/CD is used as astandard for Ethernet to reduce data collisions and increasesuccessful data transmission. The algorithm first checks to seeif there is traffic on the network. If it does not find any, it will send out the first bit of informationto see if a collision will occur. If this first bit is successful, then it will send out the other bitswhile still testing for collisions. If a collision occurs, the algorithmcalculates a waiting time and then starts theprocess all over again until the fulltransmission is complete.

When you use the fasterEthernets in full-duplex modes and incorporate switches, then you are utilizinga star topology between the switchports and the devices. This allows for more directtransmission paths and fewer collisions as compared to a bus topology whereall devices share the same paths.

Ethernet capabilities are quickly changingwith new technologies emerging every day. And while we are currently on the brinkof successfully moving into speeds higher than the current 1 Gbps with 10 Gbpsemerging over the last few years, these new Ethernettechnologies will be costly. Also, your possibilitiesfor the information world can seem endless when you connectthis Ethernet local area network to the internet to create a verylarge WAN (Wide Area Network). But that is a story for another day.

All in all, Ethernet is popular because it strikes a goodbalance between speed, cost, and ease of installation. These benefits, combined with wideacceptance in the computer marketplace and the ability to support virtuallyall popular network protocols. Want to learn PLC programmingin an easy to understand format and take your careerto the next level?