This episode was made possible by Me, theabsolute best when it comes to personalized domains. According to Internet World Statistics asof June 30, 2018, there were 4.2 billion people around the world using the internet. That’s about 55 percent of the world’spopulation. The lion’s share of internet users are inAsia – almost half – followed by Europe, Latin America, Africa and North America. 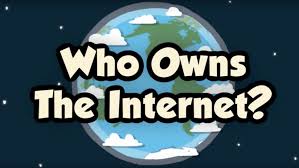 Only three years ago there were just overthree billion people using the net, so a lot of people have recently gotten themselvesconnected. Some of us perhaps couldn’t live withoutit; it’s how some of us make a living, either directly or indirectly, while some peoplewould literally suffer withdrawal symptoms if you took it away from them. Our reliance on the internet cannot be understated,and that reliance is only going to become more natural.

But who’s the proprietor of this damn thing? That’s what we’ll find out today, in thisepisode of the Infographics Show, Who Owns the Internet? First of all, what is the Internet? Well, it’s not one tangible thing. It’s made up of hundreds of thousands ofnetworks and connecting everything is a great deal of technology. As one writer said on Quora, and we like theanalogy, when we talk about the Internet it’s like talking about agriculture. Who owns agriculture? What is agriculture? It’s complicated.

But for the internet to work there has tobe a lot of infrastructure, and that infrastructure is owned by people, companies, entities. The net is what you might call a giant andmindboggling plexus, which is just an intricate network of many parts that makes up a system. Within this giant plexus are nexuses, whichcan be important points where many connections meet. Information is carried from these points,which are servers, and that information is carried down what we might call digital arteries,or fiber optic cables. Some companies own these giant servers, sometimescalled server farms.

Some of these server farms are so big, ittakes an incredible amount of electricity to power them. Forbes tells us that the largest in the worldis the Range International Data Hub in China, which is 6.3 million square feet. The second largest is said to be one in Nevada,called Switch SuperNAP, which is around 2.2 million square feet. Some of Switch’s clients include big namessuch as Fox broadcasting, Intel, Ebay and Boeing. It was reported in 2016 that Google had around2.5 million servers all over the world, but that number is a rough estimate. Google’s different servers do differentthings.

Some of them are dedicated to your querieswhen you are searching for things, while others might be dedicated to storing documents. Facebook has a bunch of large data centersof course to keep up with its 2.6 billion-plus users. So yes, someone owns those data centers, thenexuses that make it possible for people to use the internet. Then you have the telecommunications companieswho own the fiber optic cables. These cables cross borders and are threadedunderneath oceans, so people all over the planet can be connected. If you’re wondering what the differenceis between normal cable and fiber optic cable, it is that light rather than electric pulsesis sent through strands of glass which allows data to be sent faster and over very longdistances.

How long? Well, as long as you want. So why not always use fiber optic cable insteadof normal cable? Forbes wrote in 2018 that indeed this wouldbe the perfect scenario, but it can be costly because every 40-60 miles (64-96km) you haveto have something called “in-line amplification shelters”. These maintain the electronics and keep thecable active. It’s expensive to just start laying thiscable everywhere. Nonetheless, we are told that the longestterrestrial fiber optic cable is 6.4 thousand miles (10,358.16 km) long. It is owned by the Telstra Corporation ofAustralia. Its cable stretches between Perth and Melbourneand back again. Australians might be thinking, wait a minute,those cities aren’t that far apart. Well, it depends how the cable was laid.

There’s also something called the “Fiber-OpticLink Around the Globe” (FLAG) and that stretches for 17.4 thousand miles (28,000km) underwaterand runs from North America to the UK to Japan to India. It’s owned by Global Cloud Xchange whichis a subsidiary of an Indian company called Reliance Communications.

It’s one of the largest telecommunicationscompanies in the world and it helps us all stay connected. We have moved forward in great strides sincedial-up Internet. So, while no one owns this thing called theInternet, without these giant data centers and without all those cables connecting us,we would not have the Internet as we know it. There are also ISPs (Internet Service Providers),which are big companies that ensure the internet gets to your house.

These companies can control the speed of yourinternet, or even what you can access. You might have been following the recent controversiesover what has been called the end of the “free internet” with the recent changes to netneutrality, or the end of it. That’s an ongoing story. Then you have something equally as importantcalled “The Internet Corporation for Assigned Names and Numbers.” This non-profit’s motto is “One World,One Internet.” In a paper that ICANN published it wrote thatsome people think that it actually “runs the Internet.” Maybe some folks think ICANN is the biggestowner of the internet.

This is not true, but it is very important. ICANN wrote, “Figuring out who handles whatin the Internet ecosystem can be tricky.” In laymen’s terms ICANN explained that ifyou want to reach another person over the internet you need a destination name, otherwiseyou wouldn’t be going anyway. ICANN coordinates this traffic, if it didn’t,there wouldn’t be an internet.

You have a domain name system (DNS) and youhave IP addresses. We can’t remember lots and lots of numbers(IPs) so we have names we can all remember easily. Think of it as phone numbers and addresses. ICANN manages these, so we can all reach eachother. “No one person, organization or governmentcontrols the Internet,” writes ICANN, which is fitting for our show.

But for it to work we need some kind of management,so we can connect to each other. We have the foundations of a building; wehave all the technology that allows it to work as a functional building, and we havea system that ensures all its individual parts work harmoniously. There are of course lots of other importantthings that are involved in the running of the Internet. Even though to some extent we are free toexchange any information we want, it is policed in various ways.

We have the Internet Society, which createsstandards and policies. We have the Internet Engineering Task Force,which helps maintain the architecture of the internet. Companies and governments also work in tandemto do this, although that relationship is not always harmonious. As users we are also responsible for whatwe put into this great plexus, and the data we do put into it is used and sold and sometimesexploited. In this sense, we all own a bit of the internet. We are the Internet.

We may all be the internet, but that’s alot of people in a very big place- how are you ever going to stand out? How about with a cool extension to your customdomain name, like .actor or .hockey! Don’t be another faceless website, and don’tsend traffic to your competitors by accident- get yourself a domain that suits your specificpersonality and makes your site stand out with Hover. You don’t have to worry about any upsellswith Hover, and with free whois privacy your identity is safe and secure- no spammers ortelemarketers to worry about.